back to All Diseases

What is Small Intestinal Bacterial Overgrowth?

SIBO is an acronym for small intestinal bacterial overgrowth. In a healthy digestive system, the amount of gut bacteria found within the small intestine is quite low. SIBO is diagnosed when there is an excessive amount of bacteria within the small intestine. When a patient has SIBO, the digestive system may produce excessive hydrogen and/or methane gas, which can cause many gastrointestinal symptoms such as bloating, diarrhea, cramping, and/or constipation. SIBO has historically been diagnosed via a hydrogen and methane breath test and either classified as hydrogen-related SIBO or methane-related SIBO. However, new guidelines outlining the distinction between each classification have led to the reclassification of methane-related SIBO as Intestinal Methanogen Overgrowth (IMO), since methane in the gastrointestinal tract is produced by archaea, which is not bacteria.

What is the Small Intestine (a.k.a. the “Small Bowel”)?

How is SIBO diagnosed?

The hydrogen and methane breath test for SIBO/IMO is a non-invasive diagnostic tool to identify SIBO and can be administered in the comfort of a patient’s own home. Patients are given a substrate solution to drink (lactulose or glucose), which is a mixture of water and a carbohydrate substrate. The patient will collect a baseline sample, and after drinking the substrate solution, the patient will continue to collect a series of breath samples by simply breathing into a test tube using a straw. In a healthy individual, one would not expect to see any hydrogen or methane in the breath samples for approximately 90 minutes – 2 hours, the approximate time it would take for the substrate to travel to the small intestine to the colon where, in a healthy system, the substrate would be fed upon by bacteria, thus releasing the hydrogen and methane gas. After ingesting a substrate solution, the patient collects breath samples every 15 minutes over a 2-hour and 15-minute (135 minutes) period.

During the hydrogen and methane breath test for SIBO, the presence of elevated levels of hydrogen or methane gas, or both, identified within 90 minutes of ingesting the substrate solution provides evidence of bacteria or archaea in the upper region of the digestive tract (i.e. at the level of the small intestine). This excessive build-up of bacteria or archaea is often diagnosed as SIBO or IMO. Companies such as Commonwealth Diagnostics International, Inc. (Salem, MA), offer FDA-registered SIBO breath test kits that can be administered in-office or in the comfort of the patient’s own home and sent back to a CLIA-certified laboratory for analysis and interpretation.

What is the relationship between SIBO and Irritable Bowel Syndrome (IBS)?

The pathogenesis of irritable bowel syndrome (IBS), once thought to be largely psychogenic in origin, is now understood to be multifactorial. One of the reasons for this shift is the realization that gut dysbiosis, including SIBO, causes IBS symptoms. The relationship between SIBO and IBS remains a subject of rigorous clinical research and scientific discussion.

The general emerging consensus is that SIBO may signify the underlying mechanism for a particular sub-set of IBS patients. Based on current data, up to ~84% of patients with IBS also have SIBO. Although SIBO can cause IBS, there are other distinct causes of IBS in addition to SIBO.

The SIBO theory of IBS 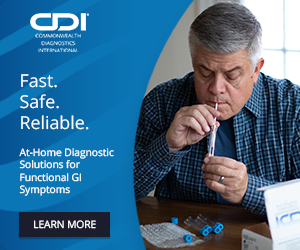 There is often a striking similarity between the symptoms of IBS and SIBO. In addition, although IBS patients often point to specific foods as triggering symptoms, the research and data supporting this proposition are still in their early stages. Evidence that SIBO may be an underlying cause for IBS comes from two main findings. The first is the observation that many patients with IBS are found to have an abnormal hydrogen and methane breath test, a test used to diagnose SIBO. The second is data showing that many patients see a significant decrease in IBS symptoms following a trial of specific antibiotics, the primary treatment for SIBO. The SIBO theory of IBS seeks to explain why bacteria end up in the wrong place. The small intestine has a natural "cleansing wave" – a movement of muscles in the lining that serves to empty the small intestine at regular intervals. Research suggests that impairment to this muscle movement may result in the bacteria remaining and flourishing in the small intestine. One discovery is that an episode of food poisoning, scientifically referred to as “acute gastroenteritis” may damage the muscles and cells responsible for this cleansing action, which helps explain the phenomenon of post-infectious IBS. It is also thought that stress may slow down the action of these muscles, thus explaining the relationship between stress and IBS.

The SIBO theory also attempts to account for the fact that IBS can manifest itself as either diarrhea or constipation with a variety of other symptoms. Research studies have confirmed that different types of bacteria or archaea, and the gasses they produce (i.e. hydrogen and methane), have different effects on gut movement and patient symptoms. Some studies have found that patients who demonstrate a higher amount of methane are more likely to experience IBS with predominant constipation (IBS-C), while diarrhea-predominant (IBS-D) patients demonstrate a higher level of hydrogen in a hydrogen and methane breath test for SIBO.

What are available medical therapies for SIBO?

If your doctor has diagnosed you as having SIBO, the primary forms of treatment are the use of certain types of antibiotic (e.e. rifaximin, neomycin, Clarithromycin, Metronidazole) and/or dietary modification (e.e. low-FODMAP diet). The type of antibiotic chosen for the treatment of SIBO is one that is not absorbed in the stomach and therefore makes its way to the small intestine where it can eliminate any bacteria it finds there. It is also important to be aware that SIBO can re-occur, and patients often experience relapse even after they have been successfully treated initially.

What is the role of diet in SIBO?

An important aspect of the role of diet in SIBO has to do with when to eat. This is because of the role of the small intestine's "cleansing wave," a phenomenon that occurs between meals. As part of the process of healthy digestion, the muscles lining the small intestine, periodically empty the small intestine of its contents. The SIBO theory for IBS suggests that impairment of the cleansing wave accounts for the proliferation of bacteria within the small intestine. This impairment of the function of the cleansing wave has been theorized to either be due to a slowing down of the action of the muscles as a result of psychosocial stress or is a result of damage to the muscles from a bout of gastroenteritis. To maximize your recovery from SIBO, it is suggested that you limit yourself to three meals a day, to provide optimal conditions for the natural cleansing wave to function. Many patients suffering from SIBO will have integrated care from both a gastroenterologist and a licensed dietician to help establish a diet that works based on symptoms and lifestyle.

What is the low-FODMAP diet?

FODMAP stands for fermentable oligo-, di-, mono-saccharides, and polyols. FODMAPs are certain types of carbohydrates including sugar, starches and fiber in foods and lead to increased GI water secretion and increased fermentation in the colon. This produces short-chain fatty acids and gases which can lead to luminal distension and the triggering of meal-related symptoms in patients with IBS.

These types of carbs are FODMAPs:

A low-FODMAP diet is designed to help people with irritable bowel syndrome (IBS) have better control over their symptoms by limiting certain foods. The American College of Gastroenterology (ACG) recommends that patients consult with a properly trained GI dietician to implement a low FODMAP diet to improve global symptoms.